24 goals to open the U19 WFC. First tournament win for Latvia

The 11th World Junior Championship started today in Brno. The entire tournament began with a battle in Arena Blue between Slovakia and Latvia. Latvia started the tournament better, turning the game in the third period and match in the perfect atmosphere 14:10.

The opening goal of the championship had to wait until the sixth minute when Tomas Kvasnica scored his first goal of the championship. It wasn’t the last goal of the game for the 18-year-old Slovakian, he added a second during the first period and completed his hat-trick during the second period. But even that didn’t help the Slovak team to their first-ever victory over Latvia at the junior championship.  When at 40:15 Ivan Tomco increased the score to 10:7 with his second goal of the game, it didn’t look good for the hopes of the team Latvia. They didn’t give up, however, and during the last period, they scored seven goals and turned the match to their side. Andrejs Šķerbergs made a big contribution to the win, he scored four goals in the game. Even in their fifth game at the junior championships, the Slovaks couldn’t beat the Latvians. Team Latvia start the championship with an important victory. In the second period, there was an interesting moment. In the first game of the tournament, the video referee had to make a decision. 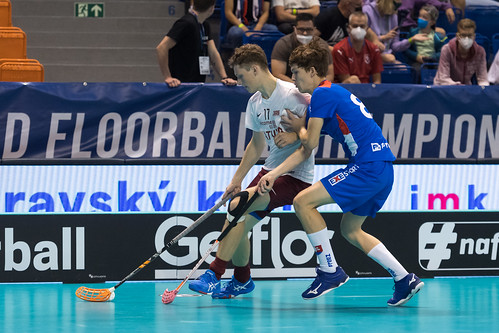 A historic win for the Belgians! They survived the drama

WFC Day 2: Who will advance to the semi-finals?